Chernobyl is one of the most famous Ukrainian phenomenon. Don’t miss such important and unique experience.

Nowadays the Exclusion Zone looks like a city jungle. This place is rightly called a “nature reserve”, because here you can meet rare animals and birds. The main condition is no human intervention.

There are radiation-hazardous places in the Chernobyl zone, of course. However, the routes in the tour program ARE NOT PRESENTED RADIATION HAZARD with clear compliance with the requirements of the escorts. 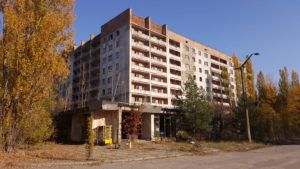 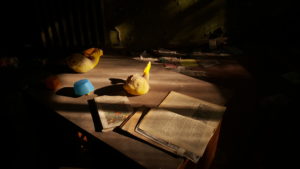 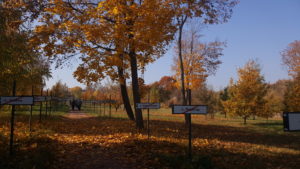 The price of one-day tour to the Chernobyl zone:

The rental price of the Terra-P dosimeter is $ 10 per day.

The program of one-day tour to the Chernobyl zone:

the hospital receiving the firefighters and NPP workers, badly affected by the accident;
a river port and the most prestigious Pripyat café at the embankment;
a town hall – the first headquarters for mitigation of the accident consequences;
Polissya hotel, a correction point for helicopters dropping lead bags over the 4th reactor ruins;
Energetic Palace of culture, the main recreational site for the Prypyat youth;
Ferris wheel in the amusement park which was never open;
Prypyat stadium;
Swimming pool “Azure”, which was still in operation after the accident;
a fire station, the crew were the second to extinguish fire at the NPP at night of the disaster on April 26, 1986;

the Sarcophagus and the New Safe Confinement (“Arch”) – an observation point at a 300 m distance,
a fire station at the NPP, the crew arrived the first to extinguish fire at the NPP after explosion,
memorial “Life for Life” in front of the administrative building, there used to be an enormous parking lot in 1986: thousands of people arrived there daily for NPP decontamination,
the Sarcophagus construction, etc.

the world’s best memorial “To Those who Saved the World’,
an open-air exhibition of transport vehicles and robots used in 1986-clean up activities.

A trip to the Chernobyl zone requires:

Entry into the Zone is permitted only upon reaching the full age of 18.

All participants will be acquainted with the rules of conduct in the Chernobyl zone. And also will sign a document confirming the completion of instruction, absence of medical contraindications for the trip, absence of claim against the organizers of the trip and the administration of the Chernobyl zone for for change in state of health that may arise during or after that trip.

Contraindications for health reasons are: diabetes, cancer and other serious diseases.

It is worth recalling that the Zone is a place not intended for a person to stay, with many buildings in an emergency condition, an unusual environment for an ordinary person. You are solely responsible for visiting the Zone and the possible risks associated with the trip.

Persons under the influence of alcohol and / or drugs, as well as a hangover, are not allowed to travel to the Zone. Complaints are not accepted, registration fee is not refundable.

In one day of a full tour to the Chernobyl zone you will receive a dose of radiation equal to one hour of flight in the aircraft. This is 160 times less than the dose received during fluorography, as well as 3 600 times less than in one examination of CT scan of the whole body!